Automation and Jobs: The Future of Work

Given ongoing rapid advances in automation, there is widespread concern about its impact on employment and the future of jobs. Automation in certain sectors, such as manufacturing, has already caused massive displacement of workers. Experts say automation will profoundly change the nature of the job market across sectors in the next decade, and companies and workers need to prepare. A 2017 study by management consulting firm McKinsey & Company predicted that 60 percent of occupations could be computerized by 2027.

Are machines going to make human workers obsolete as the digital economy evolves? Will automation simply shift the nature of human work? The answer likely rests somewhere in the middle.

To succeed in increasingly competitive, global markets, companies must increase productivity and improve customer service, while reducing costs.They are increasingly turning to automation to help them do that. It allows them to streamline certain processes and reduce their reliance on expensive human labor. But automation isn’t the answer to everything. Humans are still going to be needed in the workplace for the foreseeable future, though their roles will undoubtedly change over time. Therein lies the challenge: how to prepare for these changing roles? Following are some key considerations.

The Historical Impact of Automation on Employment

Most people understand that automation is the process whereby machines do work formerly performed by humans, resulting in increased productivity (output) and reduced labor costs. Automation has been around for a long time, most notably transforming much of the developed world’s economies—and workforce—from agrarian to industrialized during the Industrial Revolution in the 18th and 19th centuries.

Since that time, technological advances have continued and profoundly impacted many industries. According to a 2017 study conducted by the National Council on Compensation Insurance (NCCI), the U.S. manufacturing sector’s share of total jobs declined from 25 percent in the 1950’s to less than 10 percent currently. Over the same time period, however, manufacturing output has been steadily increasing. According to Bureau of Labor Supply (BLS), manufacturing output in the first quarter of 2017 was more than 80 percent higher than 30 years earlier.

The impact on manufacturing is dramatic, but automation is impacting a wide range of industries, including advertising, sales, journalism, and logistics, to name a few. The best known current examples of this include automated online order fulfillment whereby robots pick and ship inventory in warehouses, and autonomous cars. And, of course, an example that is closer to home to most hiring managers is the development of chatbots, which are increasingly used in the recruiting industry to save time and money in the early stages of the talent acquisition process.

Types of Automation—Examples in Action

To appreciate the impact of automation on the workforce going forward, it’s important to understand the different types of automation that are transforming our world:

Jobs at Risk of Automation

Certain types of jobs have long been more susceptible to automation than others, including those characterized by repetitive tasks and routine, such as a switchboard operator or assembly line worker. Additional examples include administrative tasks such as filling out forms or answering frequently asked questions. But advances in AI will extend automation to non-routine tasks as well. In 2017, PricewaterhouseCoopers predicted that 38 percent of American jobs could be automated by 2030, including those in industries such as finance, insurance, manufacturing, communications, and information technology.

On the other hand, jobs that require understanding and management of unpredictable human behavior and/or environmental factors, and involve critical thinking and true creativity will not be easily automated, at least in the near future. For example, medical and human care providers, educators, artists, scientists, gardeners, and plumbers aren’t easily replaced by machines. This is illustrated in the following chart of the Fastest Growing Occupations, published by the Bureau of Labor Statistics (BLS): 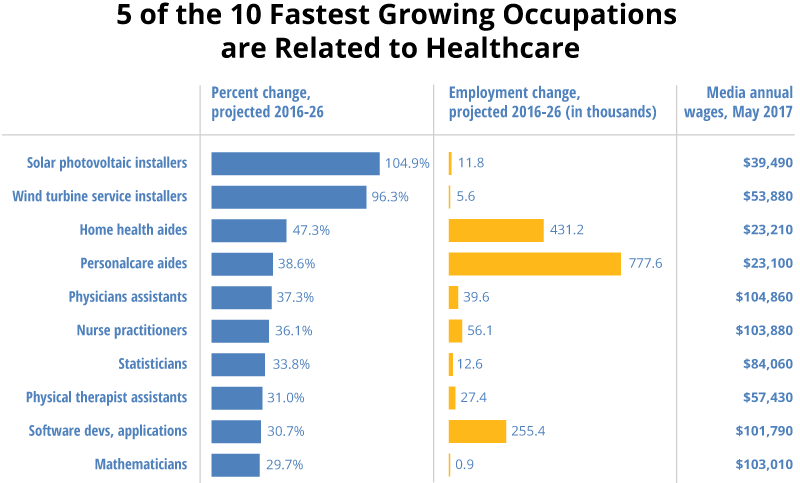 This chart also illustrates the growth of jobs related to development and deployment of new—constantly-evolving—technology which will require a human touch for the foreseeable future.

Preparing for Future Jobs in the Digital Economy

While it is true that automation will continue to displace human workers, many occupations will continue to require humans’ particular capabilities, though they will undoubtedly look different than they do today, as the digital economy evolves. The same McKinsey & Company study referenced above found that of those 60 percent of occupations that will be affected by automation, only a third of the tasks those occupations entail will be farmed out to machines. So, the trick for human workers is to adapt: understanding and capitalizing on their unique value in this new economy, developing transferable skills in the process.

Human workers possess a number of critical soft skills that defy wide-scale replication by machines. These include social skills, empathy, and the ability to make one-on-one connections, to name a few. As automation takes over the more routine, repetitive tasks in the workplace, that will free up human workers to put their unique skills to work, adding value to their companies’ bottom line. Future workplaces will involve humans working with machines in a complementary manner to achieve maximum efficiency.

And, of course, highly-skilled workers will be needed to manage and maintain automated systems. An easy way to ensure future employment is to commit to learning new technical skills to keep the machines running.

If they haven’t done so already, employers need to start thinking about future workplaces that will integrate emerging technology with human talent. Company leaders should be as transparent as possible with employees in order to alleviate their fears and manage expectations. In addition, they must prepare to help workers reskill and transition to the new or redefined jobs of the future.

Ongoing rapid advances in technology and automation will continue to disrupt the economy, changing the nature of work. But that’s not necessarily a bad thing for workers as long as they’re prepared to adapt by developing new skills and pursuing new opportunities created by the digital economy.

To learn more about how to prepare for changing technology in the workplace, contact LINK Staffing today.

Infrastructure Rebuilding and the Labor Shortage

The Return of Apprenticeships and Career and Technical Education

The Latest in Performance Management Tools and Strategies