According to Manpower Group, the hardest segment of the workforce for employers to staff hasn’t been nurses or accountants, it’s been the skilled trades workers — the welders, electricians, machinists, etc. Not only are skilled trades jobs becoming more and more difficult to fill, it’s expected to only get worse as the skills gap is likely to become more discerning.

According to EMSI, in 2012, 53 percent of skilled trade workers in the U.S. were 45 years and older and 18.6 percent were between the ages of 55 and 64. These numbers become much more distressing when compared to the overall labor force, where 44 percent of workers were at least 45 years old, and 15.5 percent of jobs were held by the 55-to-64 demographic.

In addition, skilled trades jobs have far fewer 65-and-older workers compared to the total labor force (1.9 percent to 4.8 percent). This is a clear indication that these types of jobs are much more physically demanding than the typical job.

The heavy proportion of older skilled trade workers puts into focus more than just the pending retirement for baby boomers and the large gap between the skills that employers needs and the skills that workers possess. It also touches on the fact that American high schools have largely shifted their focus from apprentice programs and vocational schools to preparing students for four-year colleges. We started focusing on academic instruction, but left behind the notion of work-force education.

Since the Great Recession, the U.S. unemployment rate among recent college graduates has remained high – around six percent in 2013. And almost half of recent grads, 44 percent, are underemployed, doing jobs that don’t even require a college degree. This disparity is not only unfair to our rising generation of workers, it is also damaging to our economy.

So what can we do to fix the skilled trades shortage? We need to increase the training programs and apprenticeships across U.S. industries and train students with the skills that employers need.

Too many recent grads have no marketable skills and face years of staggering loan payments for degrees they can’t effectively put to use. The solution is to develop innovative programs that invest in training and educating young people for skilled work. This means fighting societal prejudice against apprenticeships and vocational schools. The tech industry in particular should consider adopting apprenticeship models, like the training programs used in Germany. More than 65 percent of German teenagers start their careers after high school with vocational training. Germany’s youth unemployment rate is the lowest by far of any other country in the European Union.

We need more programs like this in the U.S. What if companies set up programs to train and educate promising young people in exchange for a commitment to work? Similar to the military’s recruiting model, this kind of program could provide a valuable education in exchange for a specific time commitment. After the time is up, these employees can stay put or apply their training and experience elsewhere. The result would be more jobs, more qualified candidates and a solution to our ongoing shortage of highly skilled labor.

As the president said in his address, “The nation that goes all-in on innovation today will own the global economy tomorrow.” We have to stop telling our young people that a four-year degree is the only route to success. Let’s lose the college bias and offer broader opportunities for career training that will guarantee good, stable jobs and help fuel our economy. Check out our related blog post on 10 Professions That Need Skilled Labor Now. 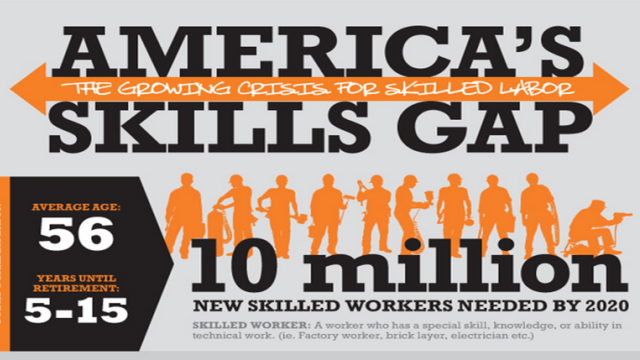