Managing Baby Boomers in the Workplace

Since the turn of this century, older workers—defined as those aged 55 and older by the U.S. Bureau of Labor Statistics (BLS)—have been increasing their share of the U.S. labor market faster than their younger cohorts. Currently, workers aged 55+ are estimated to make up 23.6 percent of the workforce, which is expected to increase to close to 25 percent by 2022. By contrast, the percentage of workers aged 25–54 is expected to decline commensurately during the same period.

While much of the focus in recent years has been on the burgeoning population of Millennials entering the workforce, Baby Boomers continue to represent a significant percentage of U.S. workers. And, all indications are that many of them are not ready to retire at the traditional age of 62–65 which means they are a force to be reckoned with for the foreseeable future. 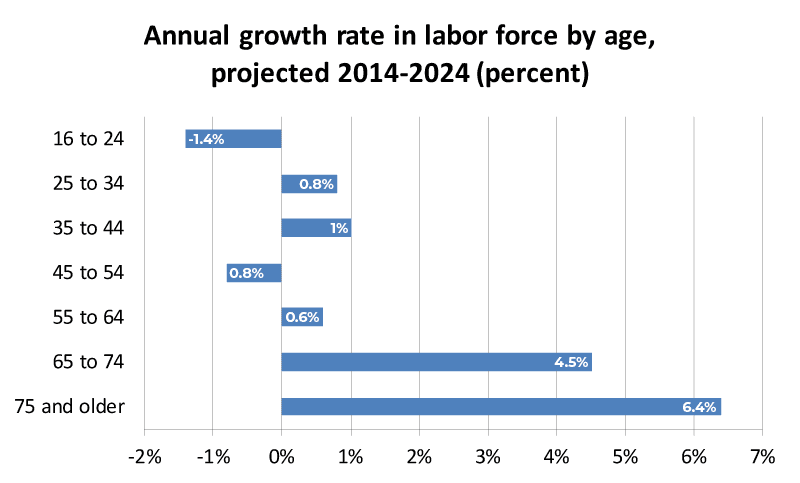 At the same time, the U.S. unemployment rate has fallen to below 4 percent, according to the BLS’s April 2018 statistics, making this the tightest labor market since 2000. In order to maintain staffing levels in an increasingly-competitive marketplace, U.S. employers must come up with a strategy for recruiting, developing, and retaining older workers.

Unfortunately, Baby Boomers are commonly and unfairly stigmatized in the workplace; misconceptions about them abound which can lead to age discrimination. Age discrimination— whereby employers favor employee candidates under the age of 40—was declared illegal in 1967 with the passage of the federal Age Discrimination in Employment Act (ADEA).

Persistent stereotypes of workers over age 55 include the following:

In reality, Baby Boomers bring a lot to the table, including:

In a 2014 study, the Society for Human Resource Management (SHRM) asked HR professionals what they considered the top advantages of older workers: Experience topped the list (77 percent), followed closely by maturity/professionalism (71 percent), and a strong work ethic (70 percent).

Since many older workers’ early careers preceded the advent of modern digital communication technology, they had no choice but to develop solid verbal communications and interpersonal skills.

And, there is plenty of anecdotal evidence that attests to the loyalty, focus, and dependability of Baby Boomers. Many older workers are also likely to be empty nesters who aren’t distracted or forced to miss work due to childcare issues.

Kerry Hannon, AARP jobs expert and author of “Getting the Job You Want After 50 for Dummies,” quips ‘[older workers] actually show up at work on time and they aren’t texting all day.”

How to Recruit, Develop, and Retain Older Workers

Employers are often focused on the latest talent acquisition tools and technologies to publicize their open positions in the marketplace, but cutting edge methods might not be the most effective way to reach workers who are more than 55 years old. In addition to whatever methods they’re using to attract younger workers, employers may want to consider placing targeted ads in the following outlets to reach an older audience:

Companies should also consider recruiting partnerships with organizations devoted to older citizens, such as AARP.

In their external advertising and on their website careers page, companies should use such verbiage such as ‘mature,’ ‘experienced,’ and ‘reliable,’ accompanied by images of mature workers. Incidentally, the EEOC does not prohibit employers targeting older workers for employment purposes.

And, as always, companies should try to leverage current employees for candidate referrals.

Companies must develop specific onboarding and training initiatives aimed at older workers to ensure their success in the organization. Not only must these initiatives include technology training for new hires, they must include training for their team leaders. Ongoing mentoring is also key.

According to the results of a recent study conducted by Portland State University and published in the April 2018 issue of the Journal of Vocational Behavior: “Older workers tend to feel more stress than younger workers when their employers don’t provide them with the support and resources needed to do their jobs well.”

The study further suggests that companies need to recognize and address the fact that older workers have different emotional workplace needs than younger co-workers. For example, older employees have a greater need for ‘meaningful interactions’ with colleagues than younger co-workers who tend to be more focused on acquiring the new skills they need to advance their careers.

In order to attract and retain older employees, companies must recognize the need to tailor certain roles for just this purpose. Older workers are more likely than their younger peers to want a work-life balance that allows them to pursue their other interests. Targeting these potential employees with temporary, part-time and/or seasonal work, or full-time roles that offer flexible scheduling is likely to provide results.

A multigenerational workforce is not only a necessity for companies facing a tight labor market, it’s also good for business. Companies benefit from the various perspectives and experience different generations bring to the workplace. The trick is understanding how to best motivate and deploy this diverse talent. Workers aged 55+ have a lot to offer, including earned wisdom that simply can’t be taught.

The Importance of Diversity and Inclusion in the Workplace